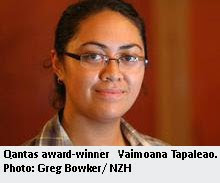 Tapaleao (23) graduated from AUT University in 2008 and joined the New Zealand Herald team soon after as a South Auckland reporter.

During her last year at university she was an intern at Spasifik magazine, and later won the Maori Television prize as well as the Storyboard award for excellence in diversity journalism.

At the Qantas event, the awards judges said that Tapaleao’s "impressive" portfolio would have "pushed the seniors hard".

This included an extensive series of news stories of the tsunami in Samoa, and an in-depth report about the individuals whose lives were lost in the sinking of the ferry MV Princess Ashika in Tonga, for which she was recognized by the NZ Human Rights Commission late last year.

"Her on the spot reporting in her native Samoa where family were tsunami victims showed true professionalism. Tapaleao was also able to put a human face to the Princess Ashika ferry sinking in Tonga with an extended tribute ," the judges said.

According to contributing editor for Pacific Media Watch, Josephine Latu from Tonga, Tapaleao's achievements were an "excellent example of just how far young Pacific Islanders can go in the industry".

She said: "It's a well-deserved award. I'm so proud she's Samoan! The Pacific Media Centre team wishes her all the best."