If you missed out on the inspiring luck with British foreign affairs journo Robert Fisk at AUT University on Tuesday, then check us out at the Pacific Media Centre YouTube channel and also our stories on PMC Online. Te Waha Nui has also provided some coverage by its editor, James Murray. Fisk's video about the US "Warrior Ethos" was been top-rated within a couple of hours of it being posted.

A breathtaking view from the PMC's guy in China 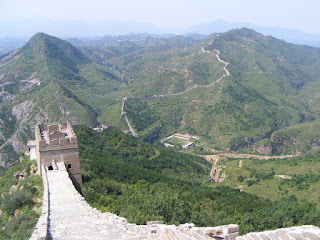 Here's a pic of the breath-taking Great Wall that quite literally does stretch further than the eye can see. Really amazing - thin and even quite low in some places, it once stretched over 5000km over the tops of the tallest hills. Some parts have been fixed, others not really.

Then come the Terracotta Warriors. For those of you that don't know, they were made by the king who first unified China over 2000 years ago. He got arrogant and wanted to continue ruling even after his death, so he had 170,000 people work on building this army of life-sized, individualised (right down to facial expressions and ranks, see the pictured general - you can tell rank by armour and headress) and battle ready (in formation, once upon a time armed with real weapons and wooden chariots, which disint 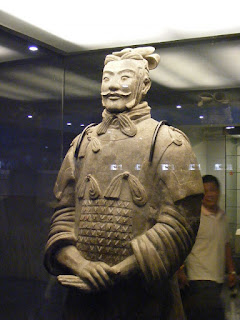 egrated etc). There are over 6000 warriors in one pit but most are still buried (they were placed in tunnels just under ground level and found in 1974 by a farmer digging a well, poor guy sits in site shop signing books all day).

Once they were fully painted but within three days of being unearthed the paint faded, they have left most buried till they can work out technology to keep the paint.

Shortly after the king died suddenly during an inspection, one of his generals led a revolt and his men found and looted the Terracotta Warrior halls, stealing the weapons and destroying most of the warriors so most of the ones seen today have been fixed up. There are in fact three pits - one command centre, one fast response unit made up of calvary, chariots and archers, and one mostly comprising the military and chariots with the main army in battle formation.

Also, follow this link for a column piece written about why I think the Chinese - and most internationals - support Obama:
http://www.chinadaily.com.cn/opinion/2008-08/30/content_6983958.htm

I hope you're all well,
Cheers
Dylan (in Beijing)
Posted by PMC feedback at 4:25 AM No comments: