The Pacific Media Watch freedom of expression monitoring project at AUT University has been awarded a $15,000 development grant to expand its regional database and journalism resource.

The PMW project was adopted by AUT’s Pacific Media Centre in 2007 and has been developed by Pacific Islands contributing editors based in the School of Communication Studies for the past three years.

Previously, the project had been steered by journalists in the region working as vo 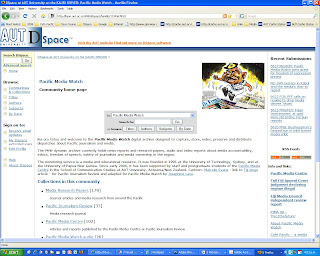 A grant has now been awarded by the Pacific Development and Conservation Trust to the PMC which will enable the project to expand its educational and research role for the region and to enhance the involvement of postgraduate student journalists.

“This is an important development for us and will enable the PMC to significantly improve the resources made available through the university’s PMW database and integrate it with other digital developments planned by the centre for later this year,” says PMC director Associate Professor David Robie.

ga. She followed Taberannang Korauaba of Kiribati who worked on the project in 2007.

Other AUT postgraduate student journalists have also contributed to the text, video and audio resource, which links to the new regional news website Pacific Scoop.

Pacific Media Watch was originally established at the University of Technology, Sydney, and University of Papua New Guinea in 1996.

Background on Pacific Media Watch
The PMW database is at: www.pacmediawatch.aut.ac.nz
Posted by PMC feedback at 7:03 PM 6 comments:

Crowd pleasers - a new way to pay for quality journalism 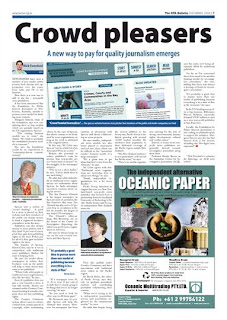 By Nick Evershed, of NPA Bulletin

Newspapers have seen a number of new media outlets present both threats and opportunities over the years, from radio and TV to the internet.

Now there is a new one to add to the list - non-profit news publishers.

It has been announced that the Foundation for Public Interest Journalism in Melbourne, Australia, intends to present a new model for funding news content.

Margaret Simons, chair of the foundation, says they are considering three or four models which are partially based on the US organisation, Spot.us.

She says the foundation would be an experiment in “community-driven commissioning”.

Spot.us uses a system of “crowd funding”. A pitch for a story is placed on their website, and then members of the public can donate money to fund a registered freelance journalist to write the story.

Publishers can also donate money to story pitches, and if they fund 50 per cent of a story pitch they gain first-publishing rights on the story. If they pay for all of it, they gain exclusive rights to the story.

The founder of Spot.us, David Cohn, says they are not in competition with traditional news publishers. Rather, they are helping them.

Freelance costs
He says his model allows newspaper to reduce their freelance costs as the public will help to fund stories they want to see published.

“When I talk with people in traditional news organisations, they like the idea,” he says.

Even if a publisher does not pay a cent towards a story, they can still benefit. Stories are released under Creative Commons licensing if a media company does not buy publishing rights.

The Creative Commons system allows users to release content from certain aspects of copyright, while maintaining others. In the case of Spot.us, this allows content to be freely used by news organisations, so long as the work is attributed to the original author.

In this way, Cohn says Spot.us “can be a little bit of an Associated Press in a sense”.

Despite the potential to reduce publisher’s costs, he stresses that non-profits are not “some kind of saviour” for the financial troubles of the newspaper industry.

“This is not a silver bullet,” he says. “I don’t think there is any such thing.” He adds that while individuals in traditional news organisations are enthusiastic about Spot.us, he finds newspapers executives cautious about using his service.

The Chronicle’s editor-at-large, Phil Bronstein, sits on the board of the Centre for Investigative Reporting, the oldest non-profit news organisation in America.

“So you need to look for other ways to fill those gaps.”

Bronstein says it’s possible Spot.us will help the Chronicle save money. However his newspaper has been cautious but discussed with Spot.us staff about collaborating on some projects.

He says smaller, independent news models are also better placed to experiment and test new ideas, which can be difficult in the “somewhat insular” business model of a large newspaper.

“It’s a great way to get ideas that don’t come from the Chronicle,” he says.

Cohn agrees with this: “Traditional news organisations are somewhat slow to adopt new things,” he says.

They also publish under Creative Commons, and 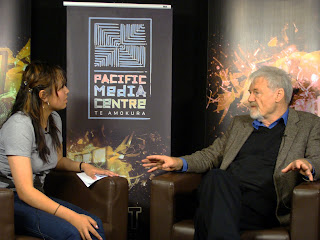 have associations with traditional news outlets in the Pacific region.

Associate Professor David Robie (pictured), editor of Pacific Scoop, says they rely on graduate journalism students - some from the University of the South Pacific which is operating in an environment of censorship in Fiji - and contributing journalists volunteering their content.

“What we’re trying to do is independent journalism, stories and journalism neglected by the mainstream media,” he says.

He adds that despite being the newest addition to the Scoop site, Pacific Scoop is the fastest growing with around 30,000 unique visitors monthly. He attributes the site's popularity to their dedicated coverage of the Pacific region outside New Zealand.

“The New Zealand audience is not particularly well served for Pacific news,” he says.

“There’s no media organisation catering for the mix of strong environmental, human rights, development, cultural and conflict issues that we offer.”

Indeed, it seems most non-profit news publishers are generally skewed towards investigative journalism along these lines.

“It’s probably a good idea to pursue more than one model of publishing, because everything is in a state of flux at the moment,” she says.

In the US, funding non-profits is big business. Billionaire Warren Hellman reportedly donated US $5 million to start up a new non-profit publisher in San Francisco.

Locally, the Foundation for Public Interest Journalism is also calling on philanthropists to support the initiative. Margaret Simons says they have had interest from a few donors, including one “five-figure sum expressed”.

Nick Evershed is a volunteer for Reportage, an ACIJ news website

Browse this article in newspaper format.
Pacific Media Centre on Twitter
More background on Pacific Scoop
Video on Pacific Scoop and PMC
Posted by PMC feedback at 9:26 PM No comments: 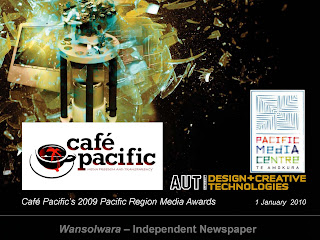 Café Pacific marked the transition into the second decade of the century with six awards to media groups and individuals for their efforts in the Oceania region. Edited by the Pacific Media Centre director, Dr David Robie, Café Pacific provides an independent perspective on the region's media issues.

The awards for 2009:
Newspaper of the Year - The Fiji Times: "The rest of the region can thank The Fiji Times and its battling editor Netani Rika for keeping up the good fight and exposing life under media censorship in Fiji."

Film of the Year - Balibo: "The on-screen version of the murder of five journalists working for Australian media in East Timor at the time of the invasion by Indonesian in 1975 has triggered debate about journalistic professionalism in an age when bravado was perhaps more important than the safety concerns dominant today."

Independent Newspaper - Wansolwara: "Not only did the courageous students at the University of the South Pacific publish a special edition examining the media in Fiji under a military regime, but they also reported global warming, environmental issues and human rights in the region."

Media Monitoring Agency - Reporters sans frontières: "In its roundup for the year, RSF highlighted the Ampatuan massacre [in the Philippines] – largest ever killing of journalists [30] in a single day ... and continued its focus on the Pacific."

Independent Blog - Crosbie Walsh's Fiji: "The former University of the South Pacific professor established his own excellent and reliable information and analysis website in a bold attempt to make sense of the complexities of Fiji’s political, social and economic order since the 2006 coup."

Special Freedom of Speech Award - José Belo: "For remaining defiant in the face of threats and a legal onslaught over his exposes of corruption that could have led to imprisonment in East Timor. He was ultimately saved by the collapse of the trumped up “criminal defamation” case against him and Tempo Semanal."

Report on the awards at Pacific Scoop
Full original citations on Café Pacific
Posted by PMC feedback at 8:02 PM No comments: 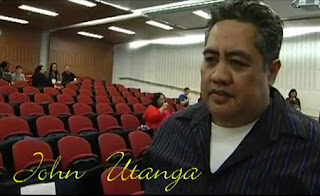 New stories and short docos filed by Pacific Media Centre students and student journos on the AUT television course are posted on our YouTube site. Some of the Māori, Pasifika and Ethnic Film Festival docos hosted by PMC chair's John Utanga of Tagata Pasifika are also included. Happy viewing.

PMC on YouTube
Brief doco about the film festival
PMC on Facebook
Posted by PMC feedback at 5:28 PM No comments: