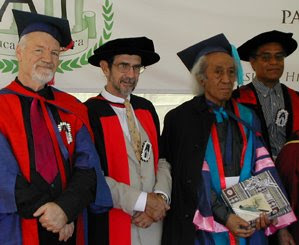 A pioneering new Pacific studies programme at Tonga’s ‘Atenisi University is set to change the way Tongan and Pacific history has been written, while embracing the institute’s classical philosophy.

The past was originally documented by missionaries who came to the Pacific in the 19th century and was therefore written from a colonial and outsider perspective, he says.

‘Atenisi Institute is encouraging Pacific Island students to rewrite their own history from an insider indigenous perspective.

“The emphasis on the new programme will be to encourage Pacific Island scholars and people that come from a background of oral history to start writing their own history,” says Dr Taliai, one of six international scholars inducted as fellows of the institute in a ceremony last month.

The four-day celebration honoured the life and achievements of founder and philosopher Professor Futa Helu.

Although the course structure is based on the history of the Pacific region, an emphasis is placed on research and the problems associated with it in the Pacific and the paradox of the insider and outsider viewpoint.

He says using the insider perspective with an outsider training will pull together both sides and give a clearer point of view.

“It ensures ‘Atenisi’s Pacific Studies will be able to publish a clearer interpretation and provide balance in the discourse and unity,” says Dr Taliai.

Misunderstanding can come from the misinterpretation of language.

“Tongan language is heliaki and this is quite common throughout the Pacific,” he says. “It is saying one thing and meaning another.”

“Tongan language is poetic and English language scientific” and it is important to acknowledge the differences in the two languages, he says.

“English people go straight to the point and Tongan people go around and around before coming to the point because Tongan society is hierarchical and stratified.”

The key element in such a society is respect of people and their superiors.

“In Tongan society, we don’t go straight to the point as in Western society,” he says.

Special places and sacred historical places are used symbolically for particular chiefs and high-ranking officials and these symbolic places take the place of the high-ranking person in the conversation.

“We start with different places associated with those superiors,” he says.

It is common to use geographic locations and flora significant to chiefs and other high-ranking officials.

“Places they have come from and certain flowers can be very significant and these are distinguished in a metaphorical way,” says Dr Taliai.

To understand this it is necessary to know what and where these places are that people are using and talking about.

“This underlying meaning is only known to the indigenous people,” says Dr Taliai.

“We are starting to see more books written by indigenous people and we want to see more of that.”

The Pacific studies programme wants to recruit people who will teach and research at the same time and postgraduates who are already doing research in the Pacific.

“We hope to achieve from this programme more understanding of one another, not only in the Pacific but in the world.”

What makes the ‘Atenisi University Pacific studies programme different from the University of South Pacific in Fiji and other universities in Auckland is the method of analysis used in looking at data, oral traditions and literature, he says.

“I started to question,” he says.

“Education and religion co-exist like a coin,” says Dr Taliai. He says they cannot be separated and sees education as being scientific and objective while religion is mainly subjective.

Dr Taliai recently completed a PhD in social anthropology. His thesis, “The legitimation of economic and political power in Tonga: A critique of Kauhala’uta and Kauhalalalo Social Moieties”, discusses how the struggle for the control of power works in Tonga.

Tonga is a stratified society and has kings, nobles, and commoners; who make up the majority of the population he says. “The power in Tonga is in the hands of a very small group,” says Dr Taliai.

“In the Tongan riots people questioned the way the country was run and the position of the monarchy and started to demand the decentralisation of power,” he says.

Future dream
His investigations throughout his PhD researched the relationships and interconnectedness between Tonga and other Pacific Islands into parts of South East Asia. He wants the Pacific studies programme to be filled from people all over the Pacific.

“You can’t separate the rest of the Pacific from Tongan history,” he says.

My dream in the future will be to bring in experts and students from the Pacific and we will work together to write a comprehensive history of the Pacific from both the insider and outsider perspective, says Dr Taliai.

“The ideal student will have a combination of western methodology of analysis and local knowledge.”

Dr Taliai describes ‘Atenisi Institute as a small but independent institution. He relates it to the institute’s Latin motto, Pauca sed matura which translates literally as few, but ripe.

“It is always small but the outcome of the product is mature,” he says.

“We will do it more effectively at ‘Atenisi because there is also the philosophy in place to develop it further,” he says.

The institute’s name ‘Atenisi is Tongan for the Greek capital, Athens. It was founded by professor emeritus Dr Futa Helu who embraced the scientific and democratic ideals of the ancient Greeks into ‘Atenisi Institute’s philosophy of education.

It places criticism at the very heart of education and has as part of its core curriculum traditional subjects such as philosophy, logic, art and literature. It is unique compared to other educational institutions in the Pacific region, which are described as utilitarian in nature.

‘Atenisi Institute is portrayed as a “people’s university” and many of its students come from isolated and poor communities.

Pippa Brown is an AUT Graduate Diploma in Journalism student on internship with the Pacific Media Centre. 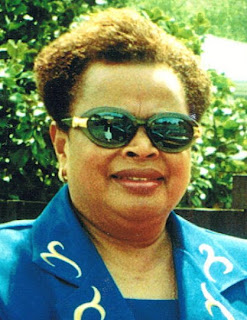 A New Zealand-based Pacific radio network has moved to defuse a controversy over a Fijian-language interview critical of the Methodist Church and alleged involvement of some leading clergy in past coups.

Yabaki also spoke about the abrogation of the Fiji constitution, censorship of the media and freedom of expression in the June 6 broadcast, but the programme's criticism of the Methodist Church in the wake of the regime’s cancellation of the annual conference drew three written complaints to Radio NiuFM/531pi.

The controversy was picked up by the independent media watchdog blog Café Pacific.

Etuata said the radio tried to achieve balance in its programmes.

“She was suspended only from one programme, not from work,” he said. “She is still being employed as an announcer while we investigate and get an independent translation because we did get a number of complaints.

“Our community radio aims to provide both views of the topic and provide balance as a responsible broadcaster on air.”

Bulou Amalaini said the off air suspension was “very unfair”.

She denied claims by complainants that she was a supporter of regime leader Commodore Voreqe Bainimarama, saying little information was coming out of Fiji and she had been trying to provide more insight and research into political developments.

'Too scared'
Formerly of Radio Fiji and with 25 years’ broadcasting experience,” Bulou Amalaini said: “People are too scared to talk, but Rev Yabaki was not too scared to be interviewed.”

Rev Yabaki, who is an outspoken champion of human and constitutional rights in Fiji, spoke about the Methodist Church after the banning of the conference, saying Fiji’s largest and most influential religious institution was “in disarray”.

ears, you will note that it supported the first coup of 1987 and also George Speight’s coup in the year 2000,” he said.

“But it opposed the coup of 2006 because it believes that Fiji should be governed by Fijians, who are their members, as if it were their divine right.

“This was the case when Dr Timoci Bavadra and Mahendra Chaudhry’s Labour Party won the general elections of 1987 and 1999.”

“But to do exactly the opposite does not only degrade the biggest domination in Fiji but also angers the members of the church who are in New Zealand.”

Bulou Amalaini said she had been told by the station management that "the interview was good but it was not balanced - that I should have interviewed somebody from the Methodist Church as well".

She said Fijian programme producer Nemai Vucago had asked the head of the Fiji Methodist congregration in New Zealand, Rev Peni Tikoinaka, to speak on the programme but he had declined because he said he was not "fully versed" over the issue.

Another Methodist clergyman was also asked but declined.

Rev Yabaki told the PMC that Bulou Analaini had been dealt a "raw deal" by the radio station "in a manner that lacks transparency".

He said she had been denied a hearing involving the three complaints.