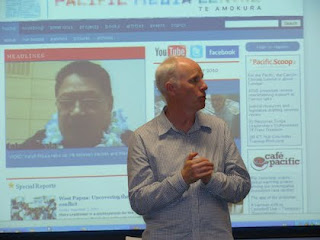 The new Pacific Media Centre’s Web 2 news site has been launched at the inaugural Media, Investigative Journalism and Technology Conference.

The new site is a collaborative work, which brings together a range of resources from separate sites including Pacific Media Watch, Pacific Scoop and Pacific media research.

Tony Murrow, the site developer, said the goal of the site was to bring the huge array of content into one umbrella website.

Dr Robie said the independent website was created with the idea of challenging the role of media around the Pacific.

“We seek to report the untold stories and issues that are simply not being canvassed by other media in the region,” he said.

“And if there is any bias at all on the website it is in favour of social justice.”

He said while many newsrooms are being cut “back to the bone” and web stories are super short, AUT University’s journalism programme is asking postgraduate students for more complexity and quality in their reports.

Contributing editor of Pacific Media Watch Alex Perrottet said the site would be an extremely useful resource for anyone looking for information, not only on the Pacific, but specifically on media and journalism in the region.

“The Pacific is an amazing place and there is an eclectic collection of individuals and groups fighting for a range of worthy ideals.

“Media is a major theme but there are many other important issues often overlooked by our Western media, even those outlets that focus on the Pacific.”

The website will soon change the format of Pacific Media Watch from an email service to an RSS feed.

“You will find quite a history there already of anything and everything to do with the media in the Pacific,” Perrottet said.

There will also be a heightened presence of university media and journalism research on the new website.

Co-editor of Pacific Scoop Selwyn Manning said he was pleased to see the year-old Pacific Scoop paired next to good, strong research.

“It gives a place where a new generation of journalists can express their work outside of a university,” he said.

Manning said the new site is an easily navigable framework, which contains a magnitude of content.

“It is displayed in a visual way as an example of convergence working,” he said.

Courtney Wilson is a graduating Bachelor of Communication Studies student journalist on an internship with AUT’s Pacific Media Centre.

Posted by PMC feedback at 5:00 PM No comments: 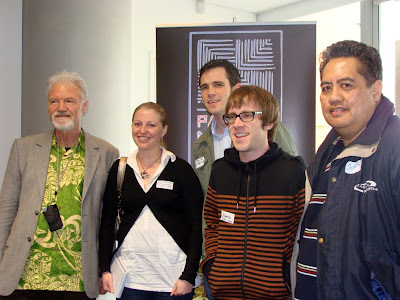 Anyone with an interest in writing, reading or studying investigative journalism, will benefit from a conference at AUT University this weekend.

Speakers at the conference, which organisers have dubbed a “fourth estate conversation”, will examine investigative journalism in New Zealand and the Pacific, both now and into the future.

And for student journalists and newly qualified journalists a masterclass will give them the opportunity to learn about the techniques of investigative journalism from a team of international journalists.

“Cutbacks in specialist staff and reduced resources have had a negative impact on investigative reporting in many media organisations. This conference will focus on independent funding models and strategies in collaborative investigations, and hopefully lead the set-up of a new group to support investigative journalism in New Zealand.”

The conference aims to raise awareness of investigative journalism in all its forms, so exhibitions and screenings of photojournalism, documentaries and multimedia presentations, are a key part of the programme.

A highlight will be the launch of the Frames of War photojournalism exhibition by keynote speaker Kunda Dixit.

Posted by PMC feedback at 3:11 AM No comments: