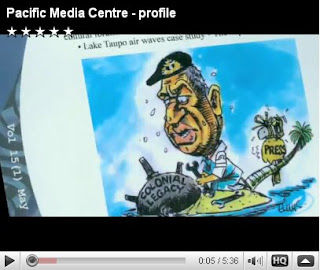 Final year television students Sophie Johnson and John Pulu have just produced a five-minute video for the Pacific Media Centre to provide a glimpse behind the faces of the students and researchers who work there.

The mini-doco profiles the centre and some of the projects at the centre such as Pacific Media Watch, Pacific Scoop, Jim Marbrook's feature film production on New Caledonia and PMC on YouTube.

Meanwhile, New Zealand Herald reporter - and AUT journalism graduate - Vaimoana Tapaleao has been recognised by the Human Rights Commission for her piece on New Zealand families grieving for lives lost in the sinking of the Tongan ferry Princess Ashika.

The feature ran in the Weekend Herald on November 7.

Posted by PMC feedback at 1:45 AM No comments: