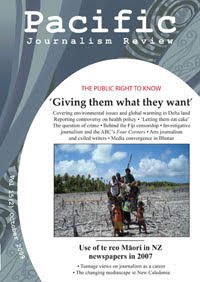 Trauma and exiled writers, the challenge of environmental journalism in Delta land, issues of editorial “slant” in health reporting and use of te reo Māori in newspapers are some of the topics featured in the latest edition of Pacific Journalism Review.

The October edition is a special “Public right to know” joint issue published by the Australian Centre for Independent Journalism and AUT University’s Pacific Media Centre.

A selection of eight peer-refereed papers, mostly drawn from the PR2K7 conference with the theme “Giving them what they want” (PR2K), has been published in this edition co-edited by professor Wendy Bacon, director of the ACIJ.

The PR2K conferences, which have been held regularly since 2000, have mostly focused on how the right of people to know what is happening has been frustrated by legal, political and social constraints on the media in the Asia-Pacific region.

“While these key concerns remain, in 2007 and 2008 the conference organisers challenged participants to present papers which explored how contemporary media developments are shaping and being shaped by new relations with the public,” Bacon writes in the editorial.

Bacon herself contributed a major role in one of the key research articles, along with two Bangladeshi colleagues, about the urgency of environmental coverage of Delta land, showing up the “neglect” of reporting ecological devastation by Australia and New Zealand media in some parts of the region and why change is needed.

This year is the Year of Climate Change in the South Pacific and several small island nations have stretched their resources to provide better environmental reporting.

John Carr focuses on journalism as storytelling and argues that a “viable public sphere” needs narrative templates for critical social, political and environmental issues that need to engender a sense of shared participation.

John Roberts and Chris Nash examine the reporting by two Sydney newspapers of the controversial issues of a safe injecting room in the face of complaints of bias.

Investigative journalism
Marni Cordell presents a pilot study on the state of investigative journalism in Australia with a focus on the ABC’s flagship Four Corners programme. PMC director associate professor David Robie provides a comparative case study on the controversial Fiji news media “review” in the lead up to the regime imposing martial law and censorship at Easter.

Other articles outside the main PR2K theme include a study of the “intentional use” of te reo Māori in New Zealand newspapers in 2007 by the Kupu Taea project at Massey University, a comparative study of teenage views on journalism as a career in Australia and NZ by professor Mark Pearson of Bond University, and a New Caledonian mediascape from aid analyst Nic Maclellan.

The review section includes a feature essay on the book Shooting Balibo written by Tony Maniaty about the murders of the “Balibo Five” television reporters and journalist Roger East by invading Indonesian troops in East Timor in 1975.

This edition, co-edited by Jan McClelland and Dr Robie, has been dedicated to AUT research administrator Jillian Green, who had been a strong colleague, friend and supporter of PJR and this month lost her struggle with cancer.

The next edition of PJR has the theme “reporting conflict” in association with the International Committee of the Red Cross (ICRC) and will be published in May 2010.

• Pacific Journalism Review can be ordered on the PJR website www.pjreview.info or through the ACIJ www.acij.uts.edu.au

Posted by PMC feedback at 7:12 PM No comments:

Bullets and mines give Violet's job an edge 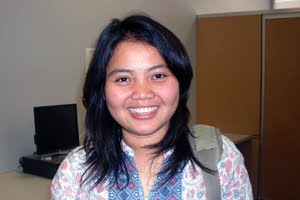 The first thing Burmese journalist Violet Cho noticed about New Zealand’s news media was its different news priorities – like a burglary story on page one of the NZ Herald.

The kind of journalism she does involves avoiding being shot or having her limbs blown off by land mines.

“I couldn’t believe that a burglary would be so important that it warranted being on page one,” she told Whitireia Journalism School students during a visit to Wellington this month.

She is surprised at the New Zealand media’s lack of international coverage and focus on local issues.

Violet has emerged from the unlikely roots of a Thai refugee camp, and is in New Zealand taking her journalism education a step further.

She fled Myanmar/Burma (she uses both names) with her family to Thailand when she was seven, and says growing up in a refugee camp was not easy.

A lot of young people were depressed in the camps, which indirectly spawned journalism and led to her career.

She was taught basic journalism by a South African woman, and with the help of the camp’s community leader, was able to covertly set up a radio transmitter within her camp, which raised spirits.

Telling the stories
Since taking up journalism, she has aimed to tell the stories of the people, but says getting even a simple story could prove dangerous and difficult because of the Burmese military presence.

In 2005, she risked her life reaching a remote Burmese village.

“The Burmese conflict policy is to shoot on sight,” says Violet.

The people of the village were teaching children to use whatever materials they had, which included a large stone-face used as a blackboard.

Violet, an indigenous Karen, holds a Burmese passport, and says Burma is a corrupt country where those in power do not share the wealth, and drugs and trafficking are just a few of the problems.

After she completes her journalism studies at Auckland University of Technology, she hopes to visit her family, who now live in America, before returning to work in Thailand.

Her dream is to see a free Myanmar and to work there.

Violet - who is hosted in New Zealand on the AUT University's Pacific Media Centre inaugural Asian Journalism Fellowship supported by the Asia: NZ Foundation - would like NZ journalists to visit Myanmar to write about the lives of the people and their hardships.

Brenda Cottingham is a student journalist at Whitireia Journalism School in Wellington. This story was published originally on Newswire.

Posted by PMC feedback at 6:14 PM No comments: 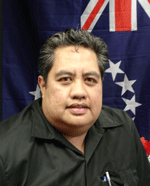 A shortage of Pacific Islanders undertaking journalism training in New Zealand will be addressed next year with the introduction of a new course at AUT University.

The Graduate Diploma in Pacific Journalism will incorporate the core papers from the Bachelor in Communications Studies degree with a journalism major, along with electives focusing on the Asia-Pacific region.

Tagata Pasifika producer John Utanga says while many Pacific students pass through communications programmes around the country, most do not choose to major in journalism.

“In the current era there is so much more choice, but we know that while some students do the journo component, not enough do,” says Utanga, who is also current chair of AUT’s Pacific Media Centre.

“The bottom line is fewer people have chosen that option over the last few years – hence the reason for getting a Pacific-focused journalism course up and running,” he says.

“That was focused on Pacific journalism, and the idea was to get Pacific kids interested in journalism,” says Utanga.

The course closed in 1994 after government funding was phased out, and no similar course has been run since.

Dr Alan Cocker, head of AUT’s School of Communication Studies, says the new course is aimed at Pacific journalists who are already in the industry, but are looking to up-skill.

It is also available for Pacific journalists from the region or other Pasifika people looking for a career change into the media industry.

Diverse communities
“One of the key things is that AUT University, as part of its strategic plan, puts a lot of emphasis on serving the diverse groups of Auckland – particularly the Māori and Pasifika communities.”

Dr Cocker says the creation of the new programme was initiated by Pacific Media Centre director Associate Professor David Robie, who ran similar courses as head of journalism programmes at universities in Fiji and Papua New Guinea before joining AUT.

Dr Robie says the new programme has been “in the pipeline” for about three years while awaiting school and government approval.

A Pacific journalist with “mana in the industry” would be recruited to run the programme.

“AUT University has set itself a strategic goal of becoming the preferred university for Māori and Pasifika students,” he says.

But he adds there is a perception in Pacific communities that journalism is not a “highly desired” career path.

“It’s certainly not well-paid and often Pacific families encourage their young people to go into careers like law or medicine.”

He says the profile of journalism as a career path needs to be raised in Pacific communities.

But despite this, Dr Robie says a “coming of age” is currently taking place in New Zealand-based Pacific journalism.

“Two young, up and coming Pacific journalists have been in Samoa covering the tsunami disaster – the New Zealand Herald’s Vaimoana Tapaleao and Radio New Zealand’s Leilani Momoisea -and they are both graduates of AUT.”

The Graduate Diploma in Pacific Journalism is due to begin in March 2010, and could take up to about a dozen students in its first year.

Christopher Adams is a Graduate Diploma in Journalism student at AUT University.

Graduate Diploma in Pacific Journalism. No fixed deadline for applications, but best to apply early.

See also Pacific Scoop
Posted by PMC feedback at 3:48 AM No comments: