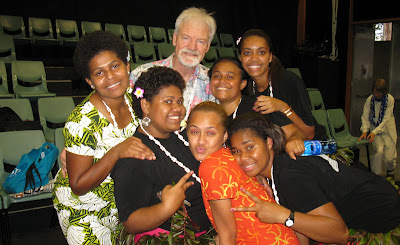 News media need to boost their coverage and analysis of Pacific environmental issues to meet the critical challenges facing the region, says a journalism educator.

Associate Professor David Robie, director of the Pacific Media Centre, told a creativity and climate change conference at the University of the South Pacific in Suva this week that most media were not doing enough about the issues.

With up to 75 million Asia-Pacific climate change refugees being predicted by 2050 by many science reports, news media needed to urgently “up their game” on environmental reporting.

Describing some of the environmental indicators confronting the region and the failure of Australia and New Zealand to adopt more radical carbon emission reduction targets and to give greater support to adaptation strategies in the Pacific, Dr Robie told the conference developing nations in the Pacific were in the frontline of global climate change.

The survival of countries such as Kiribati, Tuvalu and remote parts of the Cook Islands, French Polynesia, Papua New Guinea and Tonga were at stake.

Climate change had the potential to have an impact on almost every development and poverty issue in the region.

Part of solution?
“So where does the mainstream media fit in the middle of this complex scenario and the digital technologies revolution? Is the media part of the problem or part of the solution?” Dr Robie asked.

“For the most part, it is probably part of the problem. The relentless pursuit of ratings, short-term circulation spinoffs, the dumbing down of content and ruthless cutting back of staff are examples of this.

“And there are many instances of poor editorial judgment or downright sensationalist opportunism that accentuate this problem.

“These frequently overshadow the times when the news media does a credible job and puts in considerable effort over public social justice and environmental issues and other agenda-setting reports such as climate change.”

Dr Robie talked of several innovative information initiatives on climate change and the effective use of social and independent media that challenges mainstream “sluggishness” on the issues.

He praised the experimental new media project headed by the University of Technology, Sydney, based on the website Reportage-Enviro www.reportage-enviro.com which is linked to the Global Environmental Journalism Initiative (GEGI) – run cooperatively by several international journalism schools – and Pacific Scoop.

Climate refugee film
One of the highlights of the conference was the screening of the new film There Once Was an Island: Te Henua e Nnoho directed by New Zealander Briar March, which tells the story of an isolated Polynesian community on Takuu Atoll in the Mortlocks in Papua New Guinea losing their culture and their homes as some prepare to relocate in Melanesian Bougainville more than 250 km to the south-west.

They are among the first of the climate change refugees in the Pacific and their on-screen story was greeted with emotion by the audience.

Picture: PMC director David Robie with staff and volunteers of the School of Language, Arts and Media (SLAM) at the conference farewell, University of the South Pacific, Fiji.