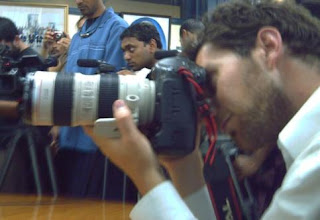 Reeling from four coups in two decades, journalists in the Pacific nation of Fiji bravely contesting draconian pressure from a military government are now taking no chances.

After a flurry of creative challenges to the military backed regime as it entrenched its power in the Pacific Islands nation of Fiji, the news media are now facing the harsh reality of life after the censorship crackdown.

Leading editors and journalists have opted to be cautious following the gag and threats by authorities that they will be shut down if they step out of line.

Not tolerating any dissent since martial law was declared on Good Friday, April 10, the regime has ordered “sulu censors” – so-called because of the traditional Fijian kilt-like garment some officials wear – and police into newsrooms to check stories and broadcasts.

Ironically, the government briefly performed an about face and invited approved international journalists back – but only a trickle have successfully entered the country. Those who have, report no interference.

Fiji, shaken by four coups over two decades, turned its back on democracy after a Court of Appeal – three Australian judges – reversed a lower court judgement and declared the post 2006 coup government illegal.

Coup leader Commodore Voreqe Bainimarama was reinstated as prime minister. He reconstituted his cabinet and devalued the Fiji dollar by a fifth in a bid to shore up the economy.

He is ruling by decree, including media censorship and a legal “shield” for any abuses by military and the police.

The regional news agency Pacnews, based in the capital of Suva and providing news on a cooperative basis to 16 countries, responded to threats by pulling the plug on all Fiji news.

This prompted calls for the service to be relocated temporarily in Australia or New Zealand.

The Pacific Islands News Association (PINA), owner of Pacnews, refused to consider moving - at least not until a regional convention due in Vanuatu in July.

Strongly condemning the regime for “bullying” the region’s news media, PINA president Joseph Ealedona, who is general manager of Papua New Guinea’s state-run National Broadcasting Corporation, appealed to President Iloilo to issue a decree for returning a “free media for the sake of the people of Fiji”.

He hoped the military intimidation of journalists would be ended by World Media Freedom Day on May 3. Already a regional media freedom conference organised by UNESCO for Fiji has been moved to Samoa.

A chorus of condemnation has come from global media freedom organisations including the Brussels-based International Federation of Journalists, Reporters Sans Frontières (Paris) and the Committee to Protect Journalists (New York).

An RSF statement accused the regime of dealing a “mortal blow” to press freedom and “heading dangerously towards a Burmese-style system in which the media are permanently subject to prior censorship”.

Amnesty International warned that the nation of 890,000 people was living in fear because of the “draconian measures”.

It called for the immediate restoration of the constitution, an independent judiciary and the rule of law.

'Culture of fear'
“The human rights situation in Fiji is getting worse by the day,” said Pacific researcher Apolosi Bose, who had visited Fiji on a fact-finding mission just before martial law was imposed.

“What is developing is a culture of extreme fear and intimidation.”

The Auckland-based Pacific Media Centre called on the Fiji regime of Commodore Voreqe Bainimarama to "end this Orwellian era of ruthless censorship and intimidation".

Initially, the media contested the regime’s crackdown with creative strategies.

The day after martial law was declared and regime censors took up residence in newsrooms, the largest of three national daily newspapers, the Murdoch-owned Fiji Times, ran a largely blank page two and several blank boxes where stories and a political cartoon had been censored.
The editors were warned don’t do it again or face being shut down.

Fiji Television, owned by the nation’s 14 provinces and the state, canned a national news bulletin and blamed it on censorship.

Management were told stop this or be closed.

The Fiji Sun announced in an editorial it would not publish any political stories and other media have now followed their lead.

The Daily Post, smallest of the three dailies, tried humour instead. The paper ran funny non stories, such as “Man gets on bus”, another man watching paint dry for four hours, and a “senior reporter” having leftover roti for breakfast – “as usual”.

Blogs back
But in the end the news media “buckled down” in a climate of fear and blogs are resurfacing, said a prominent journalist. New ones with a news focus include Fiji Uncensored and Coup Four and a Half.

Another journalist, who has written widely for international media, said: “It just isn’t worth the risk now. We have wives and children and with no independent judicial system, we can be detained without charge.”

Other editors and journalists are concerned about how quickly a culture of good news and no politics has taken over at some media organisations.

In May 1987, after the first coup by Lieutenant-Colonel Sitiveni Rabuka, Pacnews refused to be censored and moved into exile for seven years in Auckland (New Zealand) followed by Honiara (Solomon Islands) and Port Vila (Vanuatu) before returning to Fiji.

But now journalists are worried Pacnews and other media are bending too far to appease the regime.

One local journalist told the Pacific Media Centre: “Journalism has sunk so low as a result of the rule by decree that a state radio reporter rang an economist and asked, ‘Can you say something positive about the 20 percent devaluation’.

• April 13: Fiji Television reporter Edwin Nand was detained for about 36 hours over an interview he did with expelled Australian reporter Dorney. The interview was widely distributed to international media.

• April 15: The regime ordered ABC to shut down its two FM transmitters in the capital Suva and in the tourist town of Nadi. This move also affected Radio New Zealand International because it also relayed programmes via the ABC transmitters.

• April 15: Journalist Kavai Damu from the web-based news service Fijilive was detained for questioning about a story he wrote about the devaluation of the Fiji dollar. He was released later with a warning.

• April 16: The regime detained Pita Ligaiula, a reporter for Pacnews, over his stories filed to the international news wire Associated Press. He was released after being held for about 12 hours.

• April 22: Government censors forced Pacnews to remove an online story about the UN Security Council's condemnation of the scrapping of the constitution. Editorial staff removed the story, but refused a demand by the censors and police to screen stories.

Instead, Pacnews stopped publication of all Fiji news stories.

The Pacific Freedom Forum, a collective of Pacific journalists worried about growing repression against the region’s media, has launched a news group and blog and has protested over the “spin not journalism” stance of the regime.

And to give its free media message a higher profile in support of Fiji journalists, the PFF has promoted a global online petition.

Blogs rule as Fiji regime cracks down on media
Posted by PMC feedback at 5:41 PM